I've never had strong feelings about Midsummer. In a modern setting, it often carries forward traditions that were celebrated at Beltaine. In some countries, for instance, they dance the maypole at Midsummer.

Shelley, and excellent student in the dedicant program asked be about Midsummer, so I did some reasearch.

This is what I found, mostly from Alexi Kondratiev in "TheApple Branch," but most of this was verified by other reasearch. Midsummer is kind of odd in modern times. A lot of Midsummer trads are actually Beltaine traditions moved forward, as I mentioned.. But there are some differences. Of course it is the solstice. The Celts devided the year into Samios (summer) and Giamos (winter) The Celts had almost a Yin and Yang concept where at the hight of a situation, it contained the seeds of the opposite. So, Midsummer is the solstice, it is the longest day of the year, but also the height of summer. After the solstice the days get shorter. Though, its the height of summer, but it has the seed of the death of summer in it.

Since it is a liminal day, it is a day when the worlds colide. The spirits can come through much as they can on Samhain. This is why we have the world of fairie among its associations, such as "A Midsummer Night's Dream" by Shakespeare.

It is not quite the first harvest, which is Lughnasa, but it is the time when medicinal herbs are collected. Bonfires are associated with Midsummer, because it is the sun's warmth brought to earth and preserved to carry us through. We take the energy of the sun at this time when it is at the height of its strength and bring it to earth in the form of a bonfire. By interacting with the fire, we keep the sun in our hearts as its strength begins to wain.

The other day at Beltaine a good friend of mine came to the rite resplendent in pagan finery, including a beautiful cloak. (In Colorado, a cloak something you have a 50/50 chance of needing at Beltaine.) A newer grove member commented to the effect of 'He looks so good, I never dress like that for ritual so that I appear humble before the Gods.' I commented something to the effect of 'bling out all you want to, I dress the way I do because this kind of stuff is a big part of what I do on High Day.' (At the time I was moving boxes and hand carting the Maypole base into position.)

I wanted to more thoughtfully address this comment, but we were running a little behind, and I didn't have time. To the new person, if you recognize yourself, this is in NO WAY meant to chide. Also, I might misremember the conversation, I'm old and forgetful.  I'm giving the answer I wish I had had time for, and using this as an opportunity to get some personal thoughts out there.

I believe that the idea that we have to be humble before the Gods is a concept that we absorb from Christianity. Even if we were not raised Christian, Western culture is so steeped in Christianity that we cannot help but be influenced by it. I believe that even a small matter such as dress points up differences in Pagan vs. Christian mind set. A major leitmotif in Christianity is that people should be humble and obeisant to their God. In Western paganism the God/desses are much more like us, only more powerful. Without questions of Who made who, our deities are similar to ourselves. They are grandious, they are great. And they expect us  to take our own raw materiel and forge something worthwhile out of ourselves. They expect us to emulate them and to be great ourselves.

When the Celts buried important tribal leaders, they buried them with lavish grave goods. They believed that the dead would be important in the afterlife, and would need things that maintained their life style. Our ancestors didn't separate the profane and the sacred. Our minds, hearts, and yes, our physicality were consitered one functional unit. The soul was not thought to be made greater by ignoring the physical.

I believe that part of being our best self, is looking our best. So, wear that bling, work it!!!!!!

A Single Cause Deity and How This Relates to Paganism

This is a very large and loaded question. I’ll give my thoughts on this subject, although I must stress that they are merely my thoughts. We do not seek in my grove to impose orthodoxy on anyone, and I believe that any genuine seeker’s insights are no less valuable than others.

Many people have expressed to me that they believe that ultimately there is one Godhead. This thought is usually expressed as something felt intuitively. The idea has a certain attraction, beyond the scientific big bang theory, what caused the big bang? How did all the stuff that became matter get there? As a religious man, I feel that there had to be a first cause. I think that people feel that it makes the most sense that the prime cause is one, because the universe is one.

However, it is possible that the idea of one God is a result of fairly modern thinking. In the 1800 it became the accepted theory that human kind passed through phases of religious belief. It went that we proceeded from magical thinking to animism, then to polytheism to explain the natural world. From there the next advancement is to monotheism. In the 1800s scholars saw no problem in that much of the world was still polytheistic. With their belief in ‘lower cultures’ they just felt that not everyone had advanced that far yet.

While I believe that there is no rational cause to believe that the first cause could not have been a group of Gods and Goddesses acting in concert, we may have some evidence of a single first cause in the mythology. It is pretty common in Indo-European mythology to see a Sky Father figure who is only vaguely present in the stories. For instance, we have Tir in the Norse mythology who only appears actively in a few myths. In Irish mythology we have Nuada who goes into quiet retirement when Lugh becomes king of the Gods. I see in this a possible echo of a single creator theory however distant.

We’ll never answer this single creator theory definitively, and I’m ok with that. Part of the problem I have with monotheism is that it’s impossible for me to relate to a single being that knows and sees all. I feel far more comfortable with Gods and Goddesses who handle different spheres of nature and activities. If there is a single creator deity, I believe that They (I am using the transgender form of pronoun) would encompass all that is in the universe.

That is too big of a chunk for our mortal brains and spirits to relate to. So I believe that if a single cause created everything, then parts of it got separated into Gods and Goddesses that we can relate to.

I'm Not Quite Dead Yet

Passing of the Baton

It is with a heavy heart that, Silver Branch Golden Horn, announces the retirement of our current Senior Druid Pamela McAlpin. Pamela was one of the first members of SBGH and has been the Senior Druid for two years. She will be sorely missed but has chosen to move on to peruse other endeavors, and we wish her well.

But as we bid farewell to one member we welcome back Anthony Fleming as acting Senior Druid. Anthony, is of course, the founder of Silver Branch Golden Horn (along with a few others) and was the Grove’s Preceptor and is Liturgist. He completed his ADF Dedicant Program, in 2006 and is currently working on his ADF Priesthood Program.

Yesterday marked the Spring Equinox, when night and day are equal and the sun cuts a path neatly from east to wast. Spring is here! (Tell that to this weekends expected snowstorm...)

For the ancient Germanic tribes this was a time to celebrate! They venerated the Goddess Eoster (The Celts had Ostara), who represented dawn and rebirth. 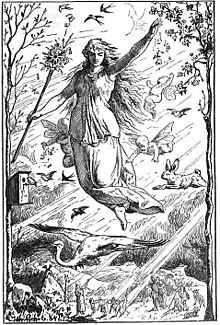 The symbols of modern Easter of course date back to this time. Bunnies, who symbolize fecundity (Bow-Chicka-Wah-Wah...) and of course are emerging from their burrows in the Spring. Eggs are mystic magic things that hold new life too (in addition to being tasty). The tradition of decorating and playing games with eggs seems to pre-date written records in much of Northern Europe. 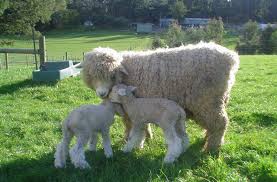 Of course for our ancestors it was also a hopeful time. Their animals could return to greening pastures. Most farm animals give birth in the spring as well, and this represented growing wealth and prosperity. Early vegetables were emerging, and if you've spent a few months eating nothing but salted meat, turnips, and grains, a sprig of fresh dandelion or sorrel looks like heaven. In a time when starvation was a real and immediate concern, even for the relatively wealthy, Spring was a great relief.

May all of you enjoy the fertility and plenty of the new season! What are you doing to celebrate Spring?

Thanks to Grove Members and SpritiWays

I would like to thank all members of SBGH and our friends at SpiritWays for all the food donations. And a great big hug to our member Pink, who took donated items from Grove members and ran an online auction. We delivered 5 boxes of food and $200 to the wonderful ladies at Gateway Battered Women's Services today. This effort will continue through next year. Please bring canned food items, milk, fruit, vegetables and boxed food items as well as cat or dog food to each of our ritual gatherings. SpiritWays will be joining us in this endeavor and we are happy to have their assistance.

As some of you may know, the Cailleach has quickly become one of my faves in Celtic mythology/theology. Scott Scherter turned me on to this and I urge you to check it out: http://www.thisisirishfilm.ie/shorts/an-cailleach-bheara

I thought there might be some interest in this publication: http://www.rdna.info/druidinquirer34.pdf